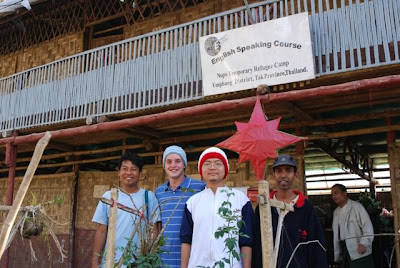 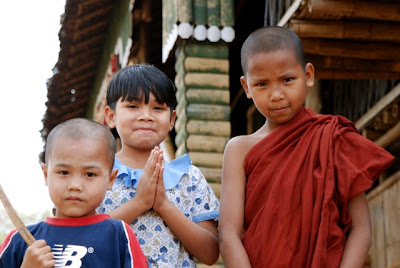 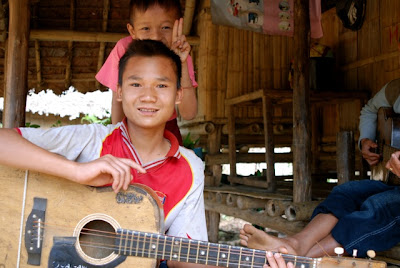 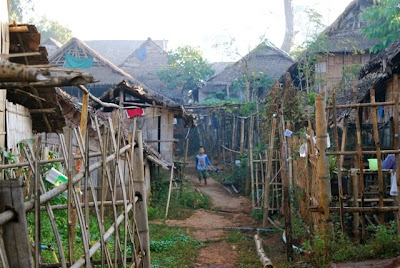 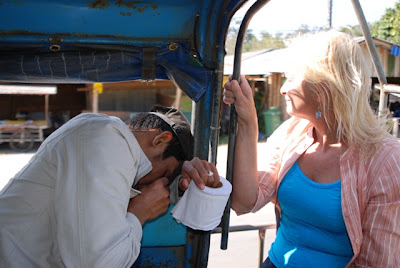 Another wonderful Blog report from Team member Lisa McCoy. We are still reeling from this trip in the most positive of ways. We will catch up on our Blog reports...promise...presently swamped!
Respect.
Asad

By Lisa McCoy
Five miles away from the Burma border under the watchful eye of the Burmese military junta is Refugee Camp Nu Po; not a place many would consider spending Christmas. But for almost 14,000 Burmese refugees, this remote Thai-controlled jungle encampment has been their home for 10 years. Astoundingly, this is where ‘Project Enlighten’ founders Asad Rahman, Olivia Lorge and I spent one of the most heartfelt Christmas’ ever. Their gift of friendship and hospitality is one that will never leave our hearts and souls.

The residents of Camp Nu Po rarely see western volunteers because the arduous 7-hour journey to this camp must be made in the back of a ‘songthaew’ - the Thai rural pick-up truck that acts as a bus by conveniently placing bench seats along either side of the box.

The 140km trip to Camp Nu Po is spent mostly winding round border hills which resulted in even the hardiest of locals pitching up their stomach contents over the side of the truck. The first photo on the left clearly displays the misery experienced by young local man on our journey. Every half hour someone, usually a child, succumbed to vomiting, which in turn nauseated others. At one point, my elbow which was placed foolishly outside of the truck received a spray of vomit from a young child sitting upwind from me.

To make matters worse, the songthaew picked up everybody at every stop until the every inch of the canopy, and box was covered with passengers. This cramped and nauseating trip is one that the three of us will never ever forget. A map of Thailand’s Burmese Refugee Camps can be found at this link which clearly details the remote location of this camp: http://www.reliefweb.int/rw/rwb.nsf/db900sid/SHIG-7L9HLA?OpenDocument . We clearly viewed Burmese armed military en route as we traveled along Burma’s border.

Our visit to the camp had to be Okayed by the Thai Camp Commander previous to our arrival. The Camp Commander is a Ministry of Thailand Thai official who is specifically trained for camp control. Refugee camps experience domestic violence, child abuse, drinking and fights on a continuous basis. It’s up to the Camp Commander and the delegated Burmese refugees in specific roles underneath him to keep peace in the camp – not an easy job when you have 14,000 people living in small bamboo houses set 4 feet apart from one another.

Camp Nu Po began as most refugee camps did, when a group of Burmese IDP (Internally Displaced People) fled across the Burma border and built the first few houses 10 years ago. It wasn’t long until the population grew to its present 14,000. Nu Po isn’t the biggest camp in Tak province either – Mae La Refugee Camp has over 37,000! Refugees from Tak province are resettled in the United States, while refugees from other provincial camps are chosen for resettlement in other countries.

We were able to meet with the Camp Commander on Christmas morning, and through an interpreter we were able to ask many questions which helped unravel for us some of the mysteries that surround the whole refugee process. Why do some refugees get chosen for resettlement in a third country and others seem to wait for years in camps? Why are some refugees issued identity cards and others not? From what I learned, it is the UNHCR (United Nations High Commissioner for Refugees) and the Thai government who make many of these decisions, but their criteria stills remains somewhat clouded to me.

We arrived at the camp about 4pm on Christmas Eve. We were taken to the main office where we were required to turn in our passports for the duration of our stay – a normal requirement for security purposes. We were promptly escorted to one home and given a glass of water. After 10 minutes we were taken to one of the few camp ‘restaurants’, where we happily gobbled down the meal that was cooked up for us – we had not eaten since 7am! From there we were taken back to the first house for some after dinner treats. Then we were taken to the camps two schools, where we were served fruits and beverages again! So few westerners visit this camp – our visit was considered one of the highlights of the year for them – three foreign visitors at once, and at Christmas! We were also treated to a special musical rehearsal for the Karen New Year celebrations that were taking place in a few days.

Yes – it all sounds so fine and wonderful how we were treated at this camp – but don’t get me wrong; the need in this camp is great. This camp lacks the many projects by NGO’s that many of the less remote camps benefit from. Nu Po has a serious lack of drinking water. The Burmese were so proud of their one water purification system, but it does not suffice for the camp’s population. There is no electricity and few generators to charge the few batteries in the camp. One organization has installed a solar power panel, but more is needed.

Another great need is in the schools. The one school which teaches kindergarten through grade eleven curriculum has 600 students. It has no textbooks. The students have to copy lessons into exercise books. There is no loose-leaf paper for the teachers to make tests or exams with. There is no photocopier. There are no computers for the school. There is no library. We visited the nursery school on Christmas morning where 13 small children eagerly gleaned through the handful of tattered childrens picture books it possessed. Those small children treated us to a chorus of 4 nursery songs perfectly performed in English. It’s amazing what they have done with so little, but the eagerness these children display for education overcomes their lack of materials. It should not have to be so. The second school is in just as bad shape. We had brought with us enough exercise books, pencils, sharpeners and rulers for about 100 children.

It was at the second school that we were treated to a special Christmas Eve celebration put on by some of the adult students who were eager to be able to spend some time with us practicing conversation in English. The room was decorated with a hand-colored life-size Santa, Christmas tree and hand-lettered banners. Again, many treats were served to us! It was one of the most joyous times of comradeship that we had ever experienced.

I happened to have brought along a recent edition of a Bangkok newspaper. When I gave it to one of the teachers, he could not contain his excitement, as they rarely see any publications from ‘outside’ in English. I made a mental note to bring along some more upon my return; maybe some National Geographic magazines as well. Oh yes – I am coming back! Along with the many other needs, the teachers emphasized to me that along with books their other biggest desire is to see more volunteer teachers coming in to help teach English. They would be happy for whatever time a volunteer could commit to this. So, at our meeting with the Camp Commander, I told him that I would return in a few weeks to volunteer for a week or two. I would be living with one of the families in the camp. As I had on Christmas Eve; I would be sleeping on a mat on the floor with some blankets. Because of its high elevation, Camp Nu Po evenings can be quite cold. We have made some wonderful friendships at the camp, I’m eager to return to spend some more time with my new-found friends.
Posted by Unknown at 4:51 PM

Lisa. Thanks so much for posting this blog. I am teaching a 22 year old woman who lived in this camp for 10 years how to speak English. I have wanted to know more about where they come from so it was a very interesting read for me. I'd love to see more photos. Thank you.

Lisa, Please email me your phone #, if you live in the USA. I am leaving in 2 days w/my destination for the 3rd time, MaeSot. I have an opportunity to teach at NuPo but would love to speak to you before I leave. My email:rosemary_2003@yahoo.com

I am a doctoral student that is in Chiang Mai now and headed to Nu Po within the week. I have been contacted by a teacher there and would love to talk to you about your experience among other things. Please email me at jen.cordaro@gmail.com. 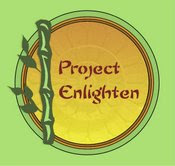